Congressmen and Women for Hamas

“A nation can survive its fools, and even the ambitious. But it cannot survive treason from within. An enemy at the gates is less formidable, for he is known and carries his banner openly. But the traitor moves amongst those within the gate freely, his sly whispers rustling through all the alleys, heard in the very halls of government itself.” ~ Marcus Tullius Cicero

The people mentioned in the article below are not merely anti-Israel, which is clearly wrong, but they are also anti-America, anti-U.S. Constitution even though 5 of them are at the highest levels of U.S. government and took an oath to uphold and protect the Constitution.

These are enemies within.

Even as short a time as 10 years ago in America this would never have happened.

“When there is no enemy within, the enemies outside cannot hurt you.” ~ Winston Churchill

September 11th, 2001 was supposed to be the beginning of an earnest war on Islamist terrorism that threatened the sovereignty, the freedoms, the rights, the American way of life. Instead since September 11th, 2001 we have bowed to Islam. Appeased Islam. Invited Islam in. Cowered and remained silent regarding Islam. Refused to speak or write the truth of Islam and the Qur’an.

Rather than rooting out and diminishing Islamic terrorism, such terrorism has risen dramatically worldwide and now we have openly vocal and brazen Islamic terrorism supporters being elected as the LAWMAKERS of our land! Inviting more Islamist terrorists in.

“Demoralize the enemy from within by surprise, terror, sabotage, assassination. This is the war of the future.” ~ Adolf Hitler

“Our strategy is to destroy the enemy from within, to conquer him through himself.” ~ Adolf Hitler

And these are not the last of the last days?

These are not the times of Romans 1 and people being given over to reprobate, unrighteous minds as a result of their blatant, continued turning from God, Jesus, the Holy Spirit, and the Holy Bible?

I suggest anyone thinking everything is just fine and dandy and that our best days yet lie ahead stop believing all the lies and propaganda, wake up and smell the stench of reality and rot and corruption, decay and erosion in the air, in the blood, in the hearts and minds of more and more people right here in America.

And if of the mind that “It can’t happen here!” as it has myriad times around the world throughout history?

Best think again and get clear on the truth and stop dining on a daily dose of lies and delusion.

We invited the enemy within. And once that door was thrown open? How do you think it’s ever going to be shut and what was before restored? It never will be…

Congressmen and Women for Hamas

Rashida Tlaib and ‘useful idiots’ on parade at the anti-Israel AMP conference. 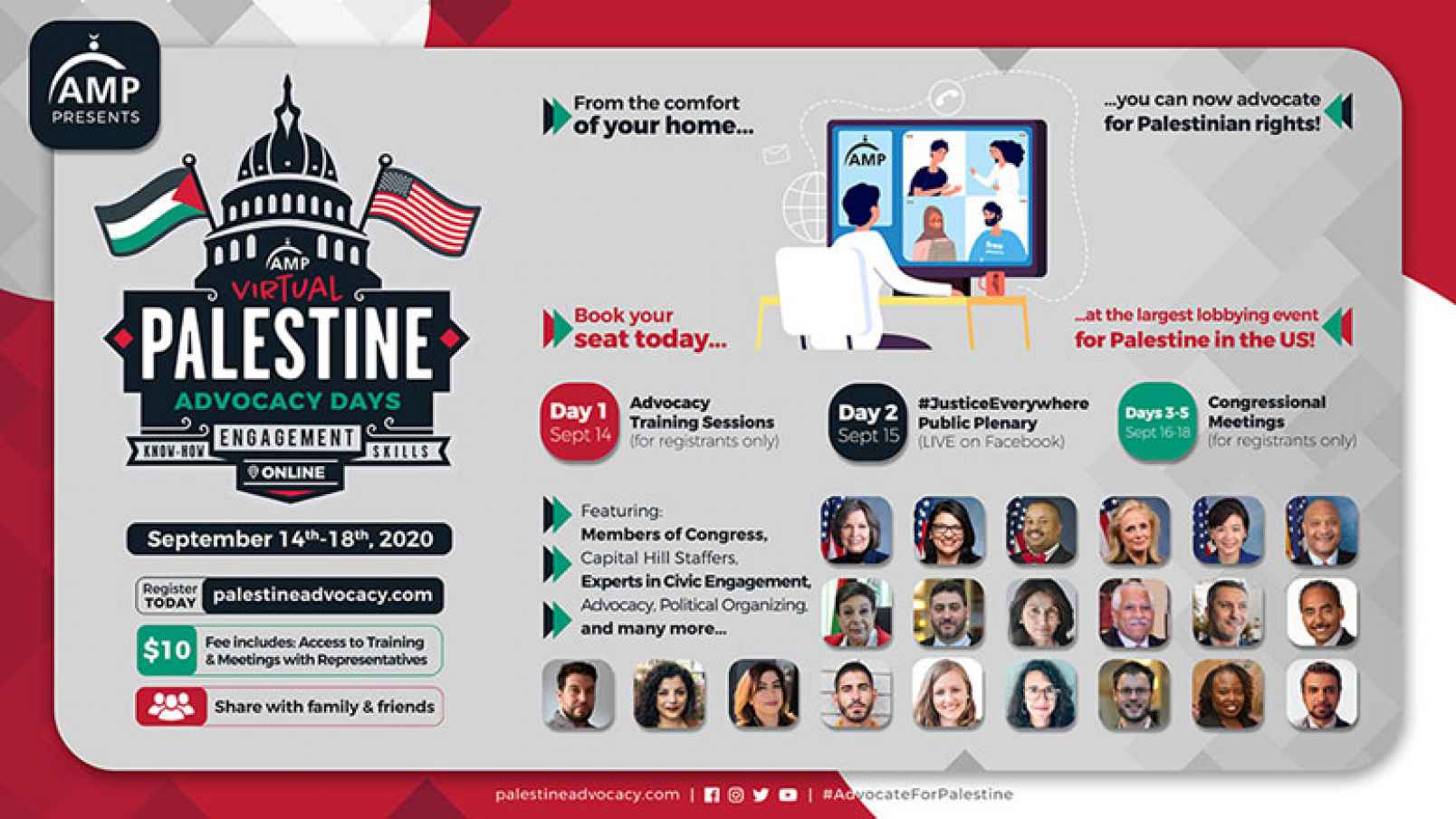 As Progressives continue to make the vilification of Israel a core issue for the Democratic Party, members of Congress continue to line up to embrace the hate. On Tuesday, September 15th, American Muslims for Palestine (AMP) will be sponsoring an online virtual advocacy event (‘Palestine Advocacy Days’) featuring at least five U.S. Representatives. But this is not just an exercise in demanding “Palestinian rights” or supporting the toxic BDS calls for boycotting Israel. AMP is rooted in Hamas, and its leadership does not shy away from its roots, so having numerous Congressmen and women involved in this type of event is beyond outrageous.

Created in 2006. AMP was the byproduct of now-defunct groups that made up the U.S. Palestine Committee, a terror umbrella organization led by then-global head of Hamas, Mousa Abu Marzook. As such, the group celebrates violence against Israelis. During its January 2018 ‘JERUSALEM IS A RED LINE’ rally, AMP repeatedly led chants of “Long live Intifada” – Intifada meaning Palestinian violent uprising. AMP’s Chairman, Hatem Bazian, who also founded Students for Justice in Palestine (SJP), notoriously called for an American intifada, at an April 2004 rally in San Francisco. Citing uprisings in “Palestine” and Iraq, he asked, “How come we don’t have an intifada in this country?”

One AMP board member, Salah Sarsour, allegedly had involvement with Hamas, itself. According to a December 1998 Israeli Police memo, Salah’s brother Jamil Sarsour, in the course of an interview, claimed that Salah was involved with Hamas and did fundraising for Hamas via the Palestine Committee’s Holy Land Foundation (HLF). Jamil also claimed that Salah had plotted an attack on Israel, as revenge for the September 1998 killing of Salah’s friends – Hamas military wing Qassam Brigades leaders and brothers, Imad and Adel Awadallah – by Israeli soldiers. Previously, Salah had spent eight months in a Ramallah prison.

AMP is a part of the U.S. Council of Muslim Organizations (USCMO). Sitting on the board of USCMO is Mazen Mokhtar, a former U.S.-based administrator for qoqaz.net, a now-defunct al-Qaeda recruitment/financing site. Mokhtar, who has spoken at AMP events, has called Hamas acts “heroic” and suicide bombings “an effective method of attacking the enemy.” Also on the board is Siraj Wahhaj, a Brooklyn, New York imam who was cited by the U.S. government as an “unindicted co-conspirator” in the 1993 World Trade Center bombing. Wahhaj has been linked to the bomb maker of the attack, Clement Rodney Hampton-El, and has praised the spiritual leader of the attack, Omar Abdel Rahman.

Representing AMP on USCMO’s Board of Directors and speaking at Tuesday’s virtual advocacy event is AMP Executive Director Osama Abu-Irshaid, who, last month, called Muslim leaders, who support UAE peace with Israel, “dirt bags” and “traitors.” Prior to AMP, he served as editor of Al Zaytounah, the official newsletter of the Palestine Committee’s Islamic Association of Palestine (IAP). This past January, Abu-Irshaid stated at an AMP event, “Palestinians, if they don’t take what they want willingly, they will take it forcefully. We promise you this, we’re going to liberate our land and we’re going to liberate our people, whether they like it or they don’t like it. Well, they have picked the wrong enemy!”

Also speaking at the AMP’s virtual advocacy event is PLO Executive Committee Member Hanan Ashrawi. Under the Anti-Terrorism Act of 1987, which is still law, the U.S. government designated the PLO a terrorist organization and a threat to America. Ashrawi, herself, has been labeled an “apologist for terror.” During a November 1991 interview with the New York Times, Ashrawi dismissed Palestinian terror as “essentially a human voice” and a “cry from the heart.” She said, “Desperate people commit desperate acts.” In May 2019, Ashrawi’s American visa was rejected and she was denied entry into the U.S.

Another speaker at AMP’s event is Muslim activist and National Committeewoman for the Florida Young Democrats (FYD) Rasha Mubarak. Mubarak has made a number of statements claiming that Israel, a sovereign nation, has no right to self-defense, and she has attacked prominent figures on social media for saying otherwise. In November 2012, Mubarak tweeted, “Lies I’m tired of hearing, Israel has the right to defend herself.” She has posted pictures of Hamas celebrations, and she has had involvement in Hamas-related groups, CAIR and Islamic Relief. This past July, Mubarak retweeted an infamous call for violence in the U.S. made previously by 60s radical, Kwame Ture.

One would expect people like Abu-Irshaid, Ashrawi and Mubarak to speak at such an incendiary event. They have all been associated with groups linked to terror. However, what you do not expect is for members of U.S. Congress to be featured with them. Yet, this is exactly what is happening on Tuesday. At least five U.S. Representatives will be featured at the AMP virtual advocacy event. They include: Betty McCollum (D-Minnesota), Rashida Tlaib (D-Michigan), Donald Payne Jr. (D-New Jersey), Debbie Dingell (D-Michigan), and Judy Chu (D-California). While AMP is working to mainstream Hamas in America, these representatives are helping in the process.

It is no secret that many of these Congressmen and women embrace and enable Islamic extremism. This infiltration of Islamists into the highest levels of the U.S. government – allowed by our nation’s representatives using their positions to sabotage American values – is a page taken straight out of the Muslim Brotherhood’s playbook on how to destroy America from within. Non-Muslim leftist allies are pandering to their Muslim constituencies by working with pro-terror groups, like AMP.

In the interests of national security, these government officials need to cancel their speaking engagements for this event and, instead, denounce AMP and call for the group’s closure. They took a Congressional oath “to protect America from all enemies both foreign and domestic,” and they need to make clear to the American people whose side they are on. Choosing to speak at an AMP event says it all.