Comedienne Sarah Silverman Claims: ‘There Is No Hell’

The walking dead among us

Another minister of Satan doing his bidding

The state of things among the overwhelming majority as they are — lost, dark, ignorant, blasphemous, tempting God, spewing lies… 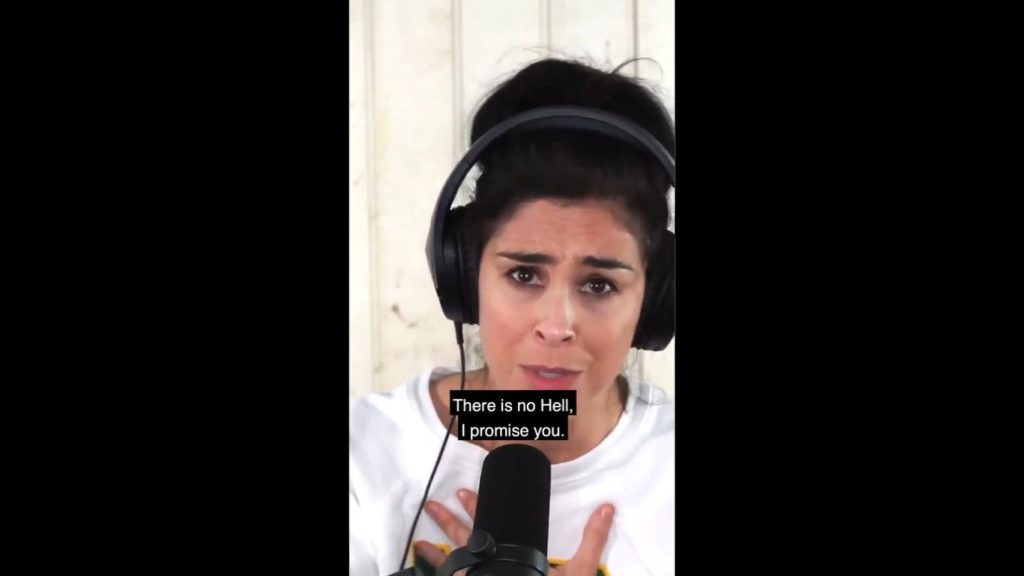 The article pertaining to the title of this post immediately follows the Scripture and brief commentary on;

The Awful Reality of Hell.

And he [Satan]took him to Jerusalem and set him on the pinnacle of the temple and said to him, “If you are the Son of God, throw yourself down from here, for it is written,

“‘He will command his angels concerning you,
to guard you,’

“‘On their hands they will bear you up,
lest you strike your foot against a stone.’”

And Jesus answered him, “It is said, ‘You shall not put the Lord your God to the test.’”

The Awful Reality of Hell

Reprinted from LIGONIER MINISTRIES the teaching fellowship of R.C. Sproul

http://Link to The Awful Reality of Hell webpage

“They will throw them into the fiery furnace, where there will be weeping and gnashing of teeth” (v. 42).

The doctrine of eternal punishment, though unpopular and frightening, is found as a part of the confession of every branch of the Christian church. It has only been in the last century that under the influence of liberalism some have denied the reality of hell. There was a time when preachers proclaimed that “man is very bad and God is really mad.” In those days there was revival, and the church was strong and influential. Then in the nineteenth century it was decided that “man is not so bad, and God surely is not mad.” We reap the rewards of this spineless “Christianity” in society today.

The fact is, however, that virtually every statement in the Bible concerning hell comes from the lips of Jesus Christ. We cannot take Jesus seriously without also taking seriously what He said regarding everlasting punishment. There is very little about hell in the Old Testament, and very little in the epistles. It is almost as if God decided that a teaching this awful would not be received from any lesser authority than that of His own Son. Also, just as we have the fullest revelation of salvation in Jesus Christ, so also we have the fullest revelation of damnation from His lips.

Jesus chose the most dreadful images in creation to describe the reality of hell. One is the image of darkness, which emphasizes separation from God. Another is that of fire, or a lake of fire. The lake of fire is almost certainly a symbol, pointing to a reality far, far worse. The wicked who are now experiencing the wrath of God would do anything to jump into a mere lake of fire. The reality is much worse than the symbol.

It is difficult, even as Christians, to accept the reality of hell. For the most part, we would rather stand with our wicked fellow men than rejoice in the vindication of God’s righteousness and justice. That is because as Christians we still have far more in common with Adolf Hitler than we do with Jesus Christ. We are not consumed with the righteousness and holiness of God, and we are still bound up by much unresolved inner guilt. Thus, it is easier for us to sympathize with sinners and excuse them than it is for us to sympathize with the Judge of all the earth.

Hell’s primary purpose is to punish sinners. While that does not apply to believers, there are still at least two reasons to study the doctrine. First, the better we grasp the horrors of hell the more we appreciate God’s grace. Second, such an understanding should motivate us to seek the lost. Make that a priority in your life.

Comedienne Sarah Silverman Claims: ‘There Is No Hell’(Videos)

In a video posted to social media on Friday, which is a clip from her weekly podcast, comedienne and actress Sarah Silverman claimed that there is no Hell in an effort to remove the fears of those who believe in eternal punishment. Her remarks have generated some pushback and have also demonstrated that many do not understand the gospel.

“If you’re in the range of my voice right now, and you’re someone who believes [in] and fears Hell, let me release you of that fear right now,” Silverman said in the video clip. “There is no Hell. I promise you.”

“I mean, what do I know?” Silverman, a secular Jew, added, seemingly recognizing that she could be wrong. However, she followed with, “But I believe it with my whole heart.”

She recounted a time when she was in New York and blurted “there’s no Hell” at children who were finishing the day at their Catholic school.

Silverman said that after one boy responded to her, she asserted, “I’m an adult, and I’m telling you, I promise you there is no Hell.”

Her friend then corrected her, stating that she should not be telling other people’s children what to believe. Silverman jested that the worst that could come from it would be that she “ruins” Hell for them.

She then reiterated to listeners that she was releasing them from a fear of eternal punishment.

“I promise you’re not going to be a crueler person because you don’t believe in Hell,” Silverman said, seemingly suggesting that people can be “good” and “kind” without God. “You’re going to make the same mistakes either way.”

She then declared, “If there’s Hell, may God strike me dead right now.” Because she did not die, Silverman smiled and said, “See, no God.”

Her remarks generated a number of responses online, both from those who echoed her stance and those who sought to impart snippets of the gospel to Silverman.

“Oh my [Lord’s name in vain], thank you for saying it. I’ve been released from this [expletive] spell for about two years now after being raised by an ultra-conservative fundamentalist Christian parent. [I’m] relishing my life in sin and so far I haven’t been struck down by any form of lighting bolt or fire,” one commenter wrote.

“You don’t need a belief in God or Hell to know what is right or wrong. I don’t believe in God and I don’t steal or commit other heinous acts,” another stated. “If I am wrong and I am standing at the pearly gates, I can tell Peter I chose to be the best person I could be without fearing the wrath of God.”

“If God is omnipotent, why is there a Hell? And if there was a Hell, why would Satan punish you for upsetting or disobeying God? He should reward you!” a third asked.

“She says there is no God, yet [for] her ‘be good, be kind’ stance she had to borrow from the biblical worldview,” one commenter noted. “Be good without borrowing from the 10 Commandments — let’s see how far you go.”

“There’s no Hell? Wow. Is there no evil either? Is there no good? No right or wrong?” another asked. “I know we now live in a world where there [are] no consequences for our actions, but I pray maybe your heart finds that there is Heaven. Because without Hell, there can be no Heaven.”

“As someone who is also an adult, let me tell you there is a Hell and a God,” a third commented. “And a good thing too, otherwise there would be no hope of final justice.”

“One of the greatest tricks the devil ever pulled was convincing the world he did not exist, but his greatest was convincing you that you are free while forcing you to put the shackles on,” another shared. “Sarah, God will judge the world one day and no one gets away with anything.”

Scripture outlines that all are born with the Adamic sin nature, being naturally drawn to that which is contrary to the law of God (Torah) and utterly incapable of changing by themselves. All men are thereby lawbreakers and will be found guilty when judged, much like in a court of law.

Romans 3:19 outlines, “Now we know that what things soever the law saith, it saith to them who are under the law, that every mouth may be stopped and all the world may become guilty before God.”

Ecclesiastes 7:20 states, “For there is not a just man upon earth that doeth good and sinneth not.”

Scripture outlines that Jesus’ sacrifice on the cross was the propitiation for men’s sins (1 John 2:2; 1 John 4:10), a doctrine in Christianity known as substitutionary atonement. He took the punishment that the lawbreakers rightfully deserved, “the just for the unjust, that he might bring us to God” (Romans 4:25, Romans 5:9, Romans 5:16, 1 Peter 3:18), a doctrine known as justification.

The Bible also teaches about regeneration, as in addition to sparing guilty men from eternal punishment, Christ sent his Holy Spirit to make those who would repent and believe the gospel new creatures in the here and now, with new desires and an ability to do what is pleasing in the sight of God by His indwelling and empowerment (Ezekiel 11:19, 2 Corinthians 5:17, Titus 3:5).

Jesus said that men must be born again, and have their very nature transformed by the Spirit from being in Adam to being in Christ, or they cannot see the Kingdom of God (John 3:3-8).

“Ah! my dear friends, there may be some who rail at God’s justice, but no convinced sinner ever will,” respected preacher Charles Spurgeon once said in a sermon entitled “Unimpeachable Justice.” “He sees God’s law in all its glorious holiness, and he smites his hand upon his breast, and he says, ‘O sinner that I am, that I ever could have sinned against such a reasonable law and such perfect commandments!’”

“He sees God’s love towards him, and that cuts him to the very quick. He says, ‘Oh, that I should ever have spit on the face of that Christ who died for me! Wretch that I am, that I could ever have crowned that bleeding head with the thorns of my sins, which gave itself to slumber in the grave for my redemption!’ Nothing cuts the sinner to the quick more than the fact, that he has sinned against a great amount of mercy.”

“… When you reflect what a deal of mischief you have done by your sin, you will then say, ‘Lord, Thou art clear when Thou judgest; Thou art justified when Thou condemnest.”