CNN’s Don Lemon Claims: ‘Jesus Christ Admittedly Was Not Perfect When He Was Here’

“Let them alone; they are blind guides. And if the blind lead the blind, both will fall into a pit.”

“Leave them; they are blind guides. If the blind lead the blind, both will fall into a pit.”

knowing that you were ransomed from the futile ways inherited from your forefathers, not with perishable things such as silver or gold, but with the precious blood of Christ, like that of a lamb without blemish or spot. He was foreknown before the foundation of the world but was made manifest in the last times for the sake of you who through him are believers in God, who raised him from the dead and gave him glory, so that your faith and hope are in God.

Who did no sin, neither was guile found in his mouth:

He did not commit sin, and no deceit was found in his mouth;

You know that he appeared in order to take away sins, and in him there is no sin.

He made the one who did not know sin to be sin for us, so that in him we might become the righteousness of God.

For we do not have a high priest who is unable to sympathize with our weaknesses, but one who has been tempted in every way as we are, yet without sin.

I do not know if you watch CNN or not. I do not. Ever. Why spend precious time, time given as a blessing by the Lord watching and listening to the ministers of Satan at work? Why waste time listening to and watching unbelievers that are Biblically illiterate discuss in grave error such things as were spoken in the brief video clip provided below?

I believe the Lord Jesus is wholly God and was wholly man when He was on earth. Spotless. Blameless. Sinless, and yes that means PERFECT. He is the propitiation for our sins. He was and is the Sacrificial Lamb of God, the replacement of the spotless Passover lamb.

People such as Mr. Don Lemon exhibit their massive ignorance. Their unbelief and the sad and terrible part is there are people, at least a few dozen still tuning in to CNN and him, that are believing what such an illiterate and ignorant man is saying.

The Lord Jesus was not only PERFECT and without spot, without blemish, without sin while on earth wholly man and wholly God, Holy of Holies in every regard, but the Lord Jesus has been PERFECT from before the world began and throughout all of eternity and will be.

If only Mr. Lemon and Mr, Cuomo, or any of us could dare say the same about ourselves!

THAT is why we all need the Lord Jesus!

Yet as we see the blind continue to lead the blind as they always have since man and woman first were created. A mostly visionless people. A blind people. A lost people. A spiritually illiterate people.

Which, in godly Christian compassion and agape love we must pray fervently faithfully for restoration, revival, repentance, renewing, and for those who have never ventured out from their dens and hearts of darkness that they finally come into the light, the way, the truth, and the life…

Scripture verses and illustration did not appear in original article in Christian News Network and has been added by the administrator of A Crooked Path.

CNN’s Don Lemon Claims: ‘Jesus Christ Admittedly Was Not Perfect When He Was Here’ (Videos) 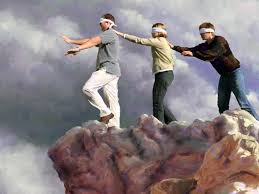 http://VIDEO URL
NEW YORK — During an episode of “CNN Tonight” this week, host Don Lemon claimed that Jesus Christ was not perfect when He walked the Earth.

“Jesus Christ — if that’s who you believe in — Jesus Christ admittedly was not perfect when He was here on this earth,” Lemon asserted to colleague Chris Cuomo, who also made a controversial statement a week ago.

“So why are we deifying the founders of this country, many of whom owned slaves?” he asked. “And in the Constitution, the original one, they put slavery in there — that slavery should be abolished because it was [what] the king wanted and then the Congress said, ‘No way,’ and so they had to come up with an alternative about three-fifths of a man.”

“They knew they had had an inconsistency with their logic,” Cuomo replied.

Lemon made the claim about Jesus while speaking about a perceived “deification” of the founding fathers by opposing the removal of statues and monuments bearing their likeness.

“We’re trying to put history in the right context,” he said in remarks leading up to the statement. “We’re trying to get you to understand that a lot of what you’ve been taught in history has been propaganda. And some things you need to unlearn so that you can become a better citizen and that the promise of what America is is available to all.”

Cuomo, who identifies as Roman Catholic, did not refute Lemon’s assertion that Jesus was not perfect.

1 John 3:5 states plainly, “And ye know that He was manifested to take away our sins, and in Him is no sin.”

2 Corinthians 5:21 similarly teaches, “For He hath made Him to be sin for us, who knew no sin, that we might be made the righteousness of God in Him.”

Hebrews 4:14-15 again outlines, “Seeing then that we have a great high priest, that is passed into the heavens, Jesus the Son of God, let us hold fast our profession. For we have not a high priest which cannot be touched with the feeling of our infirmities but was in all points tempted like as we are, yet without sin.”

1 Peter 2:21-22 also clearly declares, “Christ also suffered for us, leaving us an example that ye should follow His steps, who did no sin, neither was guile found in His mouth.”

1 Peter 1:8-19 likewise teaches, “Forasmuch as ye know that ye were not redeemed with corruptible things, as silver and gold, from your vain conversation received by tradition from your fathers, but with the precious blood of Christ, as of a lamb without blemish and without spot.”

Lemon, who has worked for CNN since 2006, came out as a homosexual in 2011 and became “engaged” to partner Tim Malone last year.

View his remarks in context above.