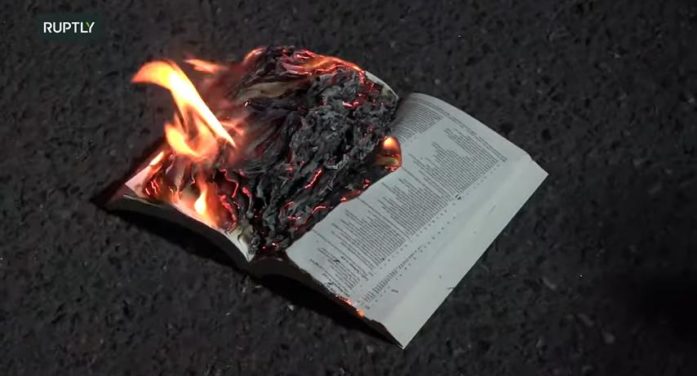 At about the 2:41:00 mark in the video provided below, of the Black Lives Matter fascist, anti-Christian, anti-Holy Bible, anti-God, anti-American rebellion now in its ninth week without let up watch as this terrorist organization, this avowed and making it no bones about it Marxist, anti-God, anti-Jesus, anti-Christianity, anti-American, anti-traditional family, pro-every sexual immorality and depravity under the sun — watch as the Black Lives Matter supporters set a Holy Bible on fire.

Dear misguided pastor, dear misguided and blinded to the truth professed Christian, dear misguided American who may not believe in God, in Jesus, in the Holy Spirit or count themselves as a Christian yet still thinking Black Lives Matter is about justice, equality, compassion, tolerance, removing hatred, and trying to make America a better place?

Perhaps it is now time to think again.

And begin thinking and seeing clearly.

(Readers, if not aware if reading this article but perhaps having missed others pertaining to this subject please find the “Related” section below the video, or video URL and read those related articles).

The hours-long protest was streamed live on YouTube by Ruptly as it went into the night. At approximately midnight, a participant was seen lighting a Bible on fire, and other Bibles were thrown into a bonfire that was created on the pavement minutes later.

The word “Holy Bible” can be seen in one close-up of the recorded footage, and a protester can be heard remarking that there were Bibles and a flag to burn.

The footage, which has been re-shared on social media, has generated much discussion, including from those who ask what burning Bibles has to do with the death of George Floyd.

“Burning the Bible does not honor George Floyd’s legacy, but it does fit with the anti-Western and anti-American Marxist critical theory fueling the violent riots,” wrote Tyler O’Neil for PJ Media.

He said that the rioters are not “peaceful protesters,” but “are agitating against American society itself. They oppose law enforcement in its entirety, and they are even willing to burn the Bible in a statement about rejecting America’s heritage.”

As previously reported, during an interview in 2015, BLM co-founder Patrisse Cullors — a self-described “queer,” artist, author, organizer and college professor who founded the organization with another lesbian and a self-described feminist — acknowledged that the group is led by “trained Marxists.”

Cullors added that the group’s definition of totality would include “Black trans[gender] folk,” those who have been incarcerated or are currently behind bars, and those with disabilities.

“We make space for transgender brothers and sisters to participate and lead,” the BLM site’s “What We Believe” page also outlines. “We are self-reflexive and do the work required to dismantle cisgender privilege and uplift Black trans folk, especially Black trans women who continue to be disproportionately impacted by trans-antagonistic violence.”

“We build a space that affirms Black women and is free from sexism, misogyny, and environments in which men are centered,” it continues. “We foster a queer‐affirming network. When we gather, we do so with the intention of freeing ourselves from the tight grip of heteronormative thinking, or rather, the belief that all in the world are heterosexual (unless s/he or they disclose otherwise).”

In an article published in June by the Washington Times, Everett Piper, the former president of Oklahoma Wesleyan University, scolded Christians — or more specifically, “woke evangelical pastors” — who support the organization.

“Have you not taken the time to do a 30-second Google search of the mission statement of the organization with which you now align?”

“The broken ideas of BLM are not godly, and they are not Christian, and any pastor suggesting otherwise diminishes the imago Dei to little more than a hyphenated construct of division rather than unity,” Piper opined.

http://Black Lives Matter: “We will burn the system down” — Part 2

http://The Black Lives Matter Movement and the Spirit of Jezebel

http://This Is Why the Official Black Lives Matter Statement Is So Disturbing