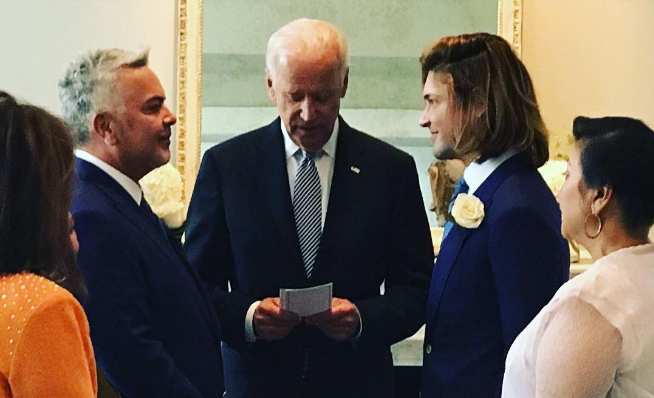 Democratic presidential candidate Joe Biden says that, if elected, he will make the “enactment of the Equality Act during his first 100 days as president a top legislative priority.” The controversial bill has been of concern to Christians as it is believed that it would preclude entities — including faith-based organizations and others who do not want to participate in affirming sinful behavior — from living out their convictions in society without the heavy hand of government coming down upon them.

The page also states that in addition to pushing for Congress to make the Act law, he will use his executive authority to “immediately reverse the discriminatory actions of the Trump-Pence Administration and then go further to end discrimination against lesbian, homosexual, bisexual, transgender, and queer+ individuals.”

As previously reported, the bill, which passed the U.S. House of Representatives last year but has moved no further, would amend the 1964 Civil Rights Act — which currently prohibits discrimination on the basis of “race, color, religion, sex, or national origin” —  to add “sexual orientation” and “gender identity” to the list. The two terms would be included as pertaining to matters of “sex” discrimination.

“[D]iscrimination against a married same-sex couple could be based on the sex stereotype that marriage should only be between heterosexual couples, the sexual orientation of the two individuals in the couple, or both,” the legislation, introduced by Rep. David Cicilline, D-RI, reads in part. “Discrimination against a pregnant lesbian could be based on her sex, her sexual orientation, her pregnancy, or on the basis of multiple factors.”

The measure would also outlaw “conversion therapy,” which faith groups say would prohibit licensed Christian therapists and counselors from sharing with homosexuals or those struggling with transgenderism that Jesus Christ offers hope and change to every man via the good news of salvation and regeneration.

“The discredited practice known as ‘conversion therapy’ is a form of discrimination that harms lesbian, homosexual, bisexual, transgender, and queer people by undermining individuals sense of self worth, increasing suicide ideation and substance abuse, exacerbating family conflict, and contributing to second class status,” the Act states.

Most commonly, the bill prohibits discrimination in employment and housing, meaning that faith-based employers, Christian schools and churches cannot fire an individual for engaging in same-sex behavior, nor can landlords with convictions about marriage decline to rent to two men or women. Women’s shelters would also not be permitted to turn away men who identify as women.

As previously reported, a Christian-based women’s shelter in Alaska filed suit in November after it was placed under investigation by the Anchorage Equal Rights Commission for declining to admit a man who identifies as a woman as the shelter was not accepting any new guests at the time.

A Christian-owned and operated foster and adoption agency likewise sued the New York State Office of Children and Family Services (OCFS) after it was given the ultimatum to either change its policies and allow placement in same-sex homes or close its doors.

Several lawsuits have been filed in recent years against faith-based hospitals that have declined to allow the performance of sex-change related operations on the premises — mainly women who sought the removal of their uterus so that they would feel more masculine physically. See here, here, and here.

The 2019 version of the Equality Act proposed in Congress specifically stated that religion cannot be cited to protect one’s actions if sued, outlining, “The Religious Freedom Restoration Act of 1993 shall not provide a claim concerning, or a defense to a claim under, a covered title, or provide a basis for challenging the application or enforcement of a covered title.”

A number of faith-based groups have spoken out against the measure, stating that not only will the bill threaten businesses run by Christians and others, but it will also have negative ramifications on churches and religious schools.

“The Act will expose persons or groups holding these beliefs to lawsuits and financial ruin. The law will mark them – like racists – as ‘hateful’ and ‘bigoted.’

“If gender identity and sexual orientation become a new protected class under federal law, then biological men will be permitted to use women’s restrooms, locker rooms, and any other facility designated for women. The Equality Act would mean even Christian retreat centers, youth camps, and Christian schools would all have no protection under the law to keep facilities, retreats, or camps strictly for biological females,” also outlined My Faith Votes.

The religious liberties group Alliance Defending Freedom similarly noted, “The ‘Equality Act’ … threatens religious colleges and universities, forbidding college students from using their federal tuition assistance at schools that ‘discriminate’ on the basis of sexual orientation or gender identity. That means any Christian university that has a code of conduct prohibiting homosexual behavior or that declines to let biological males compete on women’s sports teams will lose federal student aid.”

Last month, at the Human Rights Campaign’s virtual Unite for Equality event, Biden noted that one of his goals is to pass the Equality Act.

On Thursday evening, during a town hall event hosted by ABC News, a mother whose eight-year-old son purportedly identifies as girl, asked the candidate what he would do to “reverse [the Trump administration’s] dangerous and discriminatory agenda and ensure that the lives and rights of lesbian, homosexual, bisexual, transgender, and queer people are protected under U.S. law.”

“I would flat out just change the law,” Biden replied. “I would eliminate those executive orders, number one. … And so I promise you there is no reason to suggest that there should be any right denied your daughter …”

As previously reported, President Trump has also spoken favorably of homosexuals throughout his tenure, posting in recognition of Pride Month last year and authorizing then-U.S. Ambassador to Germany Richard Grenell to lead a campaign to decriminalize homosexuality worldwide.

Grenell now leads the “Trump Pride” advisory board, which according to Trump’s website, “is a diverse coalition dedicated to re-electing President Trump, the first president to begin his presidency in support of marriage equality.”

In August, when Grenell recorded a video referring to Trump as the “most pro-gay president in American history,” the president re-tweeted the recording with the exclamation, “My great honor!!!”

Psalm 119:136 laments, “Rivers of waters run down mine eyes because they keep not Thy law.”

Proverbs 16:12 also teaches, “It is an abomination to kings to commit wickedness, for the throne is established by righteousness.”