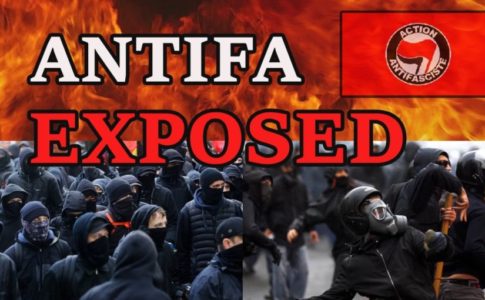 While the anti-Constitution, anti-American activist judges, courts, and politicians turn simple language into a ball of knots using semantics and double-speak to claim the fascist/communist/pagan( New Age) terrorist organization — for they are most certainly WELL ORGANIZED and WELL FINANCED — Antifa should not be designated a terrorist organization this highly visible, constantly active, well-financed and very organized global fascist/communist/pagan (New Age) organization continues to work daily and nightly to tear down every foundation within America, and Western nations.

They claim they are anti-fascism when in truth they are the prime example of what fascism is! There is an image in the article below, and the caption to that article is how Antifa was protesting in Washington, D.C. because there was a “Demand Free Speech” demonstration taking place, and the folks behind the “Demand Free Speech” demonstration were exposing truths and facts about Antifa. And Antifa wanted them and the facts and truth being revealed shut down. More than irony that a terrorist organization claiming to be anti-fascist is in fact the most fascist element within our society today!

Why won’t people take the time to learn what Antifa, Black Lives Matter (both organized terrorist groups are now entwined and mutually grafted to each other) are really about? How about taking the blinders off, pulling one’s head out of the sand and facing the facts of what is taking place in America and in every Western nation at this time?

This is not a passing phase. Nor is it merely a political movement as is being preached by media and almost every talking head and so-called expert.

This IS the minions and ministers of hell, of Satan on active duty and out of the trenches in this escalating spiritual war every person is involved in whether they acknowledge that fact or not. No one is exempt.

So, why not then become aware? Endure boot camp. Equip yourselves with what weapons you need in this spiritual war? And be very objective and ruthlessly honest as to which side you are on. And there are only two sides available in which to serve. Either the side in which God is Sovereign, Jesus is Lord, King of kings, and the Holy Spirit and complete inerrant Word of God lead and prevail, or you’re on the side of the world, and he who is god of this broken, fallen sin-filled walking in utter darkness world (see 2 Corinthians 4:4 and come to discern wisely what that means — pray and in faith ask the Holy Spirit to instruct you). The unbelievers, those in Antifa, in Black Lives Matter, in the courts, in government refusing the truth of God the Father of true Christians, those mocking and using the Lord’s name in vain are beholden to his (Satan, the father of lies) lies, thus you’re on the side of evil. On the devil’s and his ministers, appearing as angels of light side (see 2 Corinthians 11).

There are no others.

And no one can sit it out.

So, how about preparing, equipping, and facing facts. What all this rebellion, chaos, upheaval and tumult is REALLY about. What is at its root.

The activist judges, the corrupt courts, the politicians and officials, and media talking heads using semantics and double-speak, the thought-police working to control the flow of MISinformation and continue the chaos and confusion and permit Antifa to continue and not only continue but carry out its evil agenda? Those are in truth ministers of Satan. They are workers of iniquity. Workers of sin and evil among the people. So who else, what else can they truly be other than ministers and minions of the devil’s doing his work for him, serving him?

Let’s stop making things more clouded and complicated than they really are. Let’s cease with all the excuses and lies and apologies and covering up of evil. Attempting to sweep facts under the rug. Shall we?

Let’s begin to face up to what is really going on and the who, why, what and everything associated behind these events shall we? Finally folks?

Reprinted from the Clarion Project 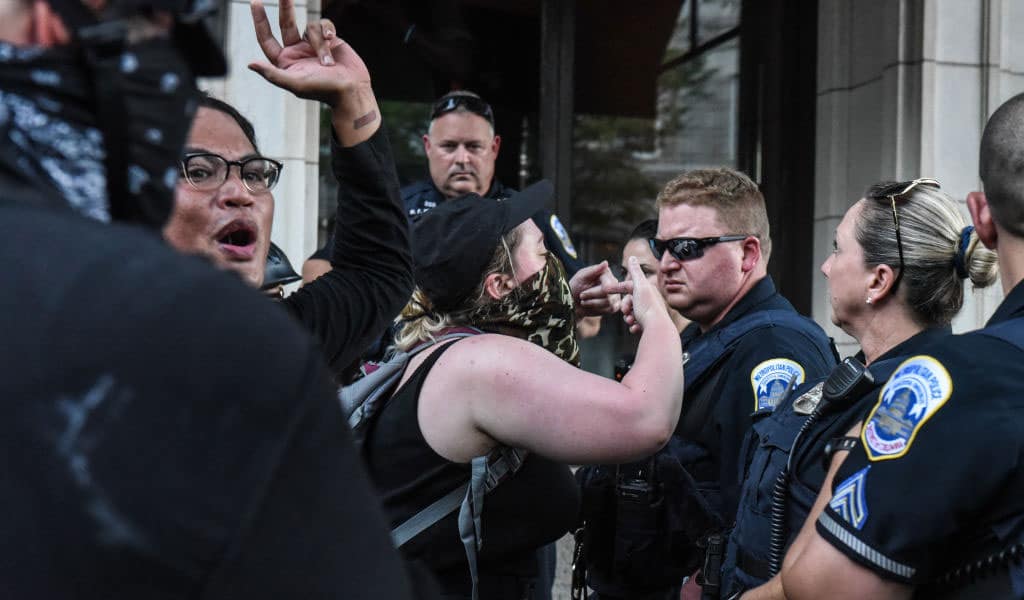 Antifa extremists protesting against a ‘Demand Free Speech’ rally in July 2019 in Washington, D.C. Antifa objected to the free speech demonstrators who were rallying for social media companies to stop their censorship (Photo: Stephanie Keith/Getty Images)

Clarion Project recently partnered with CELL (Counterterrorism Education Learning Lab) to bring you a complex but needed conversation on designating Antifa as a domestic terrorist organization.

Our special guest Andrew C. McCarthy, a former Assistant United States Attorney for the Southern District of New York, has been an integral and informed voice on the rising violence carried out by Antifa in the United States and the subsequent inquiry to designate them as a terror group.

McCarthy is best known for leading the prosecution against the Blind Sheik (Omar Abdel Rahman) and 11 other jihadi terrorists for their part in the 1993 World Trade Center bombing and plots to bomb other New York City landmarks.

After the 9/11 terror attacks, McCarthy supervised the U.S. attorney’s command post near Ground Zero. He later served as an adviser to the deputy secretary of defense. McCarthy is a highly respected author, senior fellow at the National Review Institute and contributing editor at National Review.

Host Ryan Mauro, director of Clarion Intelligence Network and Shillman Fellow, guided the conversation on the complex structures of a terror designation.

During the webinar, McCarthy framed several key questions and comparisons that address the legal and practical challenges of designating Antifa a terror group:

When asked about the confusion over Antifa being “anti-fascist” and using a moniker to gain moral and financial support, McCarthy warned about the “exquisite” use of language these groups use to gain cover for their violence. He compares the better-known example of CAIR, who are “very shrewd about wrapping themselves in American civil rights.”

“Even though they’re promoting an ideology that would undermine civil rights [sharia law], they wrap themselves in the thing they’re trying to destroy,” he commented.

Mauro and McCarthy also discussed the intersections between the Nation of Islam, Islamist Jihad, the Taliban and the Muslim Brotherhood as examples of how terror designations played out — or didn’t, and how that may inform us as to how an Antifa designation might be handled.

You can watch the full webinar here:

Clarion Project thanks our partners at CELL (Counterterrorism Education Learning Lab) for helping to make this program possible, with a special thanks to Mr. Larry Mizel for his courageous leadership and generous support in our important work.

How Generation Z is Most Vulnerable to Antifa and ISIS

How Antifa is Changing the Face of America