Some good news to pass along… 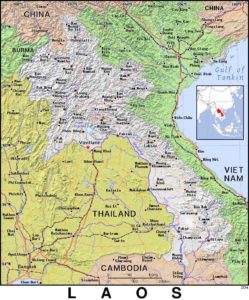 And Jesus came and said to them, “All authority in heaven and on earth has been given to me. Go therefore and make disciples of all nations, baptizing them in the name of the Father and of the Son and of the Holy Spirit, teaching them to observe all that I have commanded you. And behold, I am with you always, to the end of the age.”

Reprinted from Christian News Network & Voice of the Martyrs Korea

Representative Foley reports that in one area of Laos more than 50 new churches have been planted in six months, with over 5,000 new Christians in attendance. In an area in the north, a pastor who spent 11 years in prison for his faith was able to lead other men to Christ in prison. “After being released, these men planted 67 churches,” says Representative Foley.

“Most persecution of Christians in Laos is done by family members or village authorities who are concerned that Christianity offends the spirits,” says Representative Foley. “The central government also persecutes Christians occasionally, because Christianity is viewed as an American religion or as a tool of the CIA.” Representative Foley notes that house churches and church buildings exist, but the majority do not have a trained pastor. “Most pastors have little schooling,” says Representative Foley. “The church leader is typically the oldest or wealthiest person in the community. In most villages, no church buildings are allowed. If village leaders notice that a house church is growing, they will try to stop it. Christians have difficulty providing for themselves and their family. They often are unable to get jobs, most of which are through the government. Christians commonly are denied medical treatment, education and other social services. There are no open Bible schools in the country.” Representative Foley says that the Lao Evangelical Church (LEC) is the only government-recognized church.

A new Laotian Christian is baptized

According to Representative Foley, the Voice of the Martyrs organizations around the world have partnered with local believers for several decades. “VOM provides the local church leaders with Bibles, in addition to printing Christian literature and providing audio devices loaded with Scripture and other Christian materials, particularly in minority languages.” Representative Foley says Voice of the Martyrs has also helped to relocate Christian families evicted from their villages, providing food and other immediate needs, and providing additional help on a case-by-case basis.

Access to Bibles remains a challenge for the growing Laotian church, says Representative Foley. “Bibles are not sold in bookstores,” she says. “The LEC churches sell Bibles, and other organizations bring Bibles in with legal permission. It’s not a problem to bring one or two Bibles across the border, but Christians encounter problems when they bring in large amounts of Bibles or distribute Bibles in larger numbers.” Representative Foley says that New Testaments are popular among Laotian believers because they are  more easily concealed from authorities, family members, and neighbors.

Representative Foley says that the cost to provide a New Testament through this multi-agency campaign is 2,250 KRW per New Testament, including printing, shipping, and distribution.

“For the sake of the security of local recipients, we will not be releasing the printing and distribution details, but we look forward to reporting on the use of these New Testaments by Laotian believers.”

Representative Foley says that donations given through September 30 to Voice of the Martyrs Korea’s “Communism is Not Dead” (CIND) fund will be used for Laos New Testaments. Interested individuals can give at www.vomkorea.com/en/donation or via an electronic transfer to:

Please include the name “CIND” on the donation.